Skip to content
The Lost Hero (Heroes of Olympus, #1) by Rick Riordan 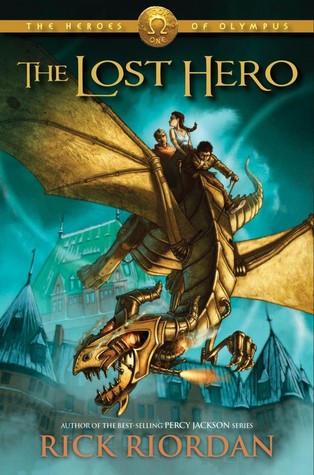 3/5 stars
The book started really strong! The characters were introduced beautifully and there was a ton of action to welcome us back into the series.
But then at about page 300, the book dragged on like I’ve never read before (in Rick’s work). It went from a 5/5 to a 2/5. The scene with Medea took forever to pass; and it wan’t that enjoyable to read!
At about page 350, the characters just stopped being the light-hearted, loving characters that Rick creates. No, no. They turned into; gloomy, angst-ridden teens, literally trying to discover who they were. At first, I found the concept interesting. But every chapter morphed into one clumpy melodramatic telling of a teen’s woe. And that is NOT what I signed up for in this bad-ass series! It’s a shame, because I was really excited to read more into this terrific world. But it made me go into a book slump, which automatically makes this book a not-so-fave of mine. I would say failure; but cmon. It was still really cool. It just needed to be shortened. The almost 600 page book should’ve been halved.
The issue with this book is that it’s not memorable. Or should I say, as memorable as the PJO stories. Maybe it’s the concept of Roman gods? Immediately once I started reading them, it turned boring for me. Maybe it reminds me too much like my ancient history class? Who knows. The Greek versions seem so powerful and mighty… while the Roman depiction kinda makes them a poor knock-off version. I need to clarify: I mean the representations in this novel; not the actual mythology.
Finally finishing the novel was enjoyable. I can safely say I will never reread this. Too long and dragged out; I’d rather skip to the next book.
Funny lines that I laughed at whilst reading the final section of the book: (no spoilers)
1. “‘Traitor!’ Hera shouted. ‘You middlesome, D-list goddess! You aren’t worthy to pour my wine, much less rule the world'”.– I’ll forever be using this line to my friends.
2. ‘”I can’t believe I thought you were hot.’
Khione’s face turned red. ‘Hot? You dare insult me? I am cold, Leo Valdez. Very, very cold.'”– Perfect scene with the snow goddess.
3.'”In case you think I’m not a true daughter of Aphrodite,’ Piper said, “don;t even LOOK at Jason Grace. Hey may not know it yet, but he’s MINE. If you even try to make a move, I will load you into a catapult and shoot you across Long Island Sound.”‘– Go Piper! My entire reaction to that was just:

The ending was a perfect tie-in. I actually do want to read it now, mainly for Percy. The final line of “Percy Jackson is at the other camp, and he is probably doesn’t even remember who he is.” MADE ME SHIVER.