MY EXPERIENCE WITH THE BOOK:
Sadly, this book was mainly a let-down sequel. LIFEL1K3 was one of thebest sci-fi books I’ve ever read. I loooove the Romanov Dynasty story, which is what Lifelike adapts (with some nuclear warfare and robotics, instead of angry, working class Russians). This sequel, however…….. FOLLOWS NOTHING. NOTHING HAPPENS. I WAS SO DULL. 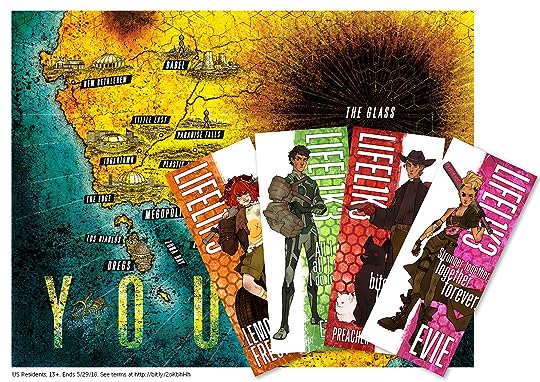 The main gang from Book 1:
Lemon: Lemon was the star protag for this instalment. She’s kidnapped by Hunter (a conglomerate of bees and robots… Idrk). They take her to the Major, who takes care of other Deviate teens. She meets family for the first time ever, and revels in who she is. It’s beautiful.
Zeke: He’s bloody useless, I tell ya! All Zeke does is travel to places, gets interupted midway, and changes his course. He bargains with the Preacher (the bounty hunter who tried to kill Zeke and Eve last book), and they try to find Lemon. He’s unlike any other love-interest though, as he understands this is the first time ever that Evie has been given a choice in her life. He respects her ability of decisions now, even though her choice was genocide. He simply turns and leaves her, and doesn’t try to persuade her otherwise. A little TOO accepting for me, I do enjoy angst, but it was powerful to see a character respect a girl’s choice for once.
Cricket: I LOVED Cricket (or Paladin)’s storyline. Cricket is kidnapped by the Brotherhood, and is used as a WarBot. He grapples with autonomy and his love/loyalty for humanity in this book. He meets a new character, Solomon (a logik). Solomon introduces him to the ways of “bending” the laws of robotics. It’s a fun and interesting take on morality.
Eve: Eve is hardly in this book, which I found greatly disappointing as the first book is what made me RAVE about the series. This book barely follows any of the Romanov Dynasty retelling, and hardly shows her first time experiencing choice/autonomy. So much potential was lost. But I understand why she was sidelined– this instalment was for Lemon. But damnit, Kristoff, why would you build up such a complex individual (who’s FEMALE), just to kick her aside for another complex individual (who also is FEMALE– I emphasise this, as most literature/entertainment neglects to represent women dimensionally).
Preacher: Preacher has the funniest lines in this, surprisingly. But the ending with Zeke was soooo predictable, of course he was going to (view spoiler)[betray Zeke (hide spoiler)].

New characters:
Major: Major is the head of a group of Deviate teens. He helps them and they run a sort-of… army? Battalion? Idk. He was an excellent character and relationship with Lemon.
Grimm, Deisel, and Fix: These are the other teens who are also Deviates. There’s love, there’s humour, and there’s tragedy. I can’t really tell them a part, as by this point I skimmed through their conversations together. These guys were just doing stuff like missions with Lemon, but it got boring really quickly, as nothing results in an outcome for the plot to progress.
Solomon: Solomon is a logik who has learnt to disobey the laws of robotics. He teaches Cricket how to work around the laws eg if a human tells you to shut down, they never said for how long or when. Solomon reminded me of the snake from the Garden of Eden. He was a great “old friend” (of three days) to Cricket.
Abraham: Long-lost (view spoiler)[grandson (hide spoiler)] to the Major. That’s all I can note on his character. He had relationships with Solomon, Cricket, and of course (view spoiler)[his mother (hide spoiler)], Sister Dee.

PLOT:
The plot is very drawn out. Picking up immediately from the end of LIFEL1K3, Eve separates herself from the group. Zeke, Cricket and Lemon are running away. But then Zeke realises he needs to turn back, so he separates from Lemon and Cricket– of course, all hell breaks loose once he leaves. Lemon is kidnapped and Cricket is summoned by the Brotherhood. Zeke then turns back (again) to go find Lemon, and teams up with Preacher (after Zeke rescues him from dying).

300 pages later, we get the climax. And boy, are these 300 pages boring. Nothing unfolds (view spoiler)[aside from Lemon finding her family, only for that to be ripped apart (hide spoiler)]. It’s just 3 perspectives of people in places they don’t know, and desert landscapes.

STRUCTURE:
Part 1: The Gang is dismantled.
Part 2: Deserts.
Part 3: Finally, when the story should have unfolded earlier.

Sand and Arizona and more sand

“‘You shoulda took the other bike!’ the Preacher yelled.
‘Shut up!’ Ezekiel shouted back.
‘Come on now, Snowflake, don’t be like that. I thought we was friends.’
‘We’re not friends, you’re my damn prisoner!’
‘Aw, that’s just cuz you haven’t got to know me, yet.'”

“‘Just for future reference,’ the Major said, ‘we try to limit showers to three minutes at a time.’
Lemon blinked. ‘How long was I in there?’
‘Twenty-seven.'”

“‘A bleedin’ heart can only bleed so long before it kills you.'”

THE ENDING:
The ending was long awaited for. This should’ve been what unfolded in the first 200 pages. But sadly, we got a lotttt of desert-representation instead. ANYWAYS! (view spoiler)[Lemon finds out the Major lied; he’s not her Grandpa. He’s the brother of Sister Dee, a cult leader and purist. He lied to keep Lemon from leaving. Cricket finally finds a way to disobey (he turns off his hearing), and Zeke and Eve have their show-down. Zeke gets betrayed by the Preacher (of course), who steals Ana for his employers. Zeke and Eve are left at the battle ground, both wounded and betrayed. (hide spoiler)] I was so satisfied once all of this played out– I had just sat there for 400 pages and waited, and waited, and waited. Nothing was surprising, and I had anticipated all of this from the time I cracked open the book. I wish more of the ‘unknown’ was explored instead. Oh well, time for the finale: TRUEL1F3. I hope it doesn’t drag on as much as this sequel.

IMPACT:
I wouldn’t reread this book if it weren’t part of a series. But I will definitely reread this series, as LIFEL1K3 was one of my favourite stories ever!